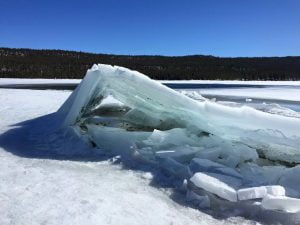 Limbert, as a portion of their business dealings. As a result, Redfish Lake Lodge opened, in 1929, with a fleet of two motorboats (as well as row boats and canoes).

This steady service has always been in demand on the Lake. Even as the Lodge fell upon hard times after Limbert’s sudden death in 1933, the dock and boat rentals remained the only available services – operating from 1934 to 1941, while the Lodge remained closed. As the years passed, a variety of floating dock structures inhabited the space, offering access to rental and shuttle services for thousands of area visitors.

It wasn’t until 2001 that a permanent dock structure was built – and that changed everything. The new, “T-shaped” dock offered the ability to run power 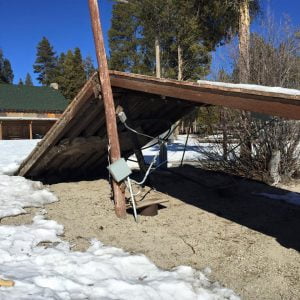 lines to lights, computers, and outlets, while a gas line was put in place to fuel guest and service boats. The larger structure also offered capability to dock, use, and rent much larger and more capable equipment – which has made thousands more guests happy over the last 15 summers.

During the last weekend of February 2015, the Redfish Lake Dock succumbed to an extremely powerful natural force, resulting in the destruction of this beloved piece of the Redfish Lake experience. The decision was made to rebuild, so we’ve decided to detail a bit more of the story for you in words and pictures. Feel free to follow along below…

Over the winter, Redfish Lake typically freezes over entirely – with some areas of ice measuring over 10 feet in thickness. During the past February, Stanley, Idaho saw some of its warmest temperatures in history. Unfortunately, the hard freeze of the previous months mixed with the warm temperatures, and when the right conditions were reached the ice buckled under pressure. The massive break apparently caused the gigantic sheet of ice to lurch forward, bending the huge, permanent steel pilings that anchor the dock like they were plastic straws; splintering and snapping wooden planks; ruining the docks entirely. The docks could be seen folded up against the point at which they met the shore. 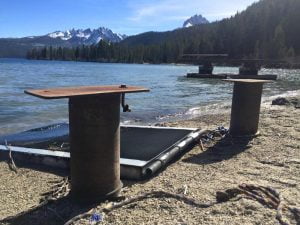 After some time for private reflection, planning and recovery, we shared the bad news with our loyal family of Redfish Lake lovers. It was determined that the docks would have to be completely torn out and built again. The outpouring of support, sharing of memories, expressions of gratitude, and overall positive experience was overwhelming – to say the least – and we knew the decision to rebuild was the correct one. We quickly realized that this wasn’t simply a disaster for the Lodge (as a small, family-owned/operated business) and our Family; it was devastating to all the amazing people who visit and love Redfish Lake. We had to rebuild. 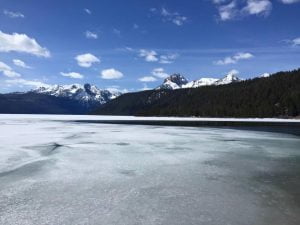 Operating an historic property within a National Recreation Area is not without its complications and we found that the process to redesign, approve, and build a totally new structure was going to take months (maybe even longer). The feedback overwhelmingly favored the Dock as it was, so we determined that we would build again in the exact same footprint and design as the first structure. This decision would (hopefully) allow us to open the Dock during Summer 2015, but it was a risky proposition given the possibility of the same incident occurring all over again. We simply decided the risk was worth it and proceeded with planning. 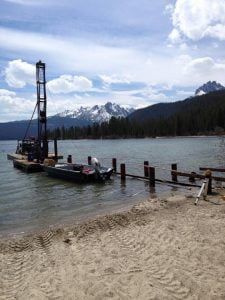 The remaining Dock structure was removed from the Lake. All the materials that were salvageable were kept in order to be reused on the reconstruction project. This left Redfish Lake with no docks – an eerie and empty sight that hadn’t been seen since 2001.

The dock rebuild begins! After months of planning and crew preparation, the first crew arrives at the end of April to begin driving pilings and rebuilding. Luckily, the unseasonably warm weather offered a rare opportunity to work on thawed ground and liquid water far earlier than is normal. This made some aspects of the project easier, while making others more difficult. 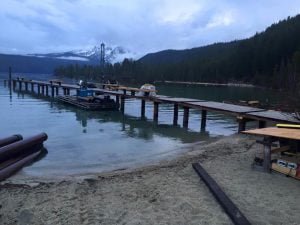 Progress is gradual at first. A special boat is used to drill and drive pilings deep into the layers of Earth beneath the Lake. 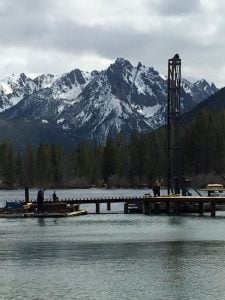 Finally – Opening Day! This is the progress on the docks. As the rest of the Redfish Lake Lodge Crew has been preparing for this day, the dock construction crews have… 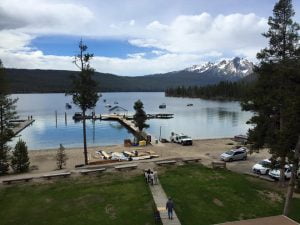 Slow but steady and the main portion is finished. Just in time for the warming weather of June! Just a little more work to go before we’re finished. Great job!

After tireless effort from the dock reconstruction crews the docks are complete! It’s an incredible feat of engineering and hard work by a very skillful team. We couldn’t be more grateful! 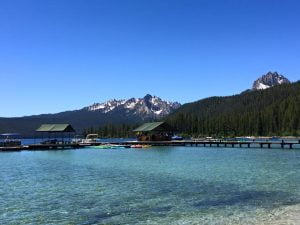 As of today, we have had a wonderful summer enjoying the rebuilt docks – and so have thousands of visitors to Redfish Lake Lodge. Having heard all the wonderful ways this wooden structure has touched the lives of so many people, it simply seemed like a crime to rob our Redfish community of the opportunity to enjoy it for many more years to come. Take a break to pay us a visit and take a walk out onto the Dock – then think about all the hands that put it together and all the feet that walk across it every day; wonder at the stories it could tell; look around at all the smiles and families enjoying each other; breathe in the natural beauty surrounding you and touch the cool, clear, life-giving water that flows beneath. While it would all be possible without the Dock, it just wouldn’t seem nearly as close or as sweet. We’re very happy and thankful that it’s still here to play a part in our Redfish Lake story. We hope you are too.

Have You Seen All The Exciting Changes At The Lake?…

Redfish Lake Lodge: In The News…

Your Complete Guide to the Weather at Redfish Lake