Whether you are a first-time visitor or a repeat guest, there is plenty of history surrounding our lakeside oasis. Keep reading to discover the most fascinating things you didn’t know about Redfish Lake and the Sawtooth Wilderness.

For more information on the best things to do and places to see in our area, be sure to request access to our complimentary Vacation Guide.

Get the Vacation Guide

Do you want to search for the things you didn’t know about Redfish Lake and the Sawtooth Wilderness during your next trip here? Check out the fun facts about the history and nature in our gorgeous area!

1. Our Area Is Home to Amazing Geology

The Eocene Epoch, Sawtooth Batholith formed the northern Sawtooth Mountains, while the Sawtooth Mountains south of Alturas Lake formed in the Cretaceous period, Idaho Batholith. This explains much of the differentiation in appearance, geology, and geography of our stunning region.

2. The Fascinating Glacial Past of the Sawtooths

Hundreds of lakes in the Sawtooth Wilderness formed as glaciers eroded the Earth around them, then melted away as the Little Ice Age ended. Some unconfirmed glaciers were still present until as recently as the 1850s. In their place, they left 202 perennial snowfields studied and counted by a group from Idaho State University in 2011.

3. The First Known Inhabitants of the Sawtooths

The Sheepeater Tribe was the first known group of inhabitants in the area. This group of Native Americans excelled at hunting and would search for goats, sheep, elk, and deer in the summer months. The capability to kill such prized game offered the tribe the power to trade furs and meat at high value to other groups.

As more settlers, trappers, and miners began to visit the area, conflict with the Sheepeaters and other Native American tribes in Idaho became unavoidable. Pioneers explored further into Native American territory, becoming more nervous of these interactions, while threatened tribes moved further and further into the mountains for safety. Then, in 1879, five Chinese miners were murdered on Loon Creek, near the Middle Fork of the Salmon River, and the blame fell on the Tribe. From this point, interactions between the settlers and natives descended into chaos known as the “Sheepater Wars,” which ended with the surrender of the remaining 51 Sheepeaters.

You can see the remnants of a rock shelter used by the Sheepeater Tribe located near Little Redfish Lake, over a wooden bridge crossing Redfish Lake Creek at the lake’s outlet. This is a neat look into the history of this amazing area.

Redfish Lake and its smaller sister, Little Redfish Lake, draw their names from the brightly colored Sockeye Salmon swimming into the basin every summer. Stories describe waters filled with massive, red fish that you could walk across their backs. Early images and history illustrate the lake as a fantastic recreation destination for boating and fishing.

With the construction of dams, over-fishing, and other changes to the environment, Redfish Lake saw a devastating impact on its native Salmon population, culminating in 1992 with the return of Lonesome Larry, the solitary salmon to return in that year. Since that time, the species remains endangered, and the battle continues to protect its legacy at Redfish Lake. In 2010, the count grew to 1,355 returning salmon. You can check out the Sawtooth Fish Hatchery during your trip for more information on these fascinating fish.

You may not notice it, but a framed painting hangs on the eastern wall of the Redfish Lake Lodge Dining Room. It looks slightly faded and blends in perfectly with the rustic mountain setting. Why? Because it’s an original work, created by lodge founder and historical Idahoan Robert Limbert, at nearby Alice Lake.

His original signature lies in the bottom corner. Additionally, an original photograph showing Limbert, on location, in the process of creating his masterpiece, hangs alongside the large and beautiful painting. The photo was a gift from Margaret Limbert-Lawrence (late, former owner of Hollywood Market in Boise), Robert’s daughter, who fondly recalled her days growing up at Redfish Lake. Thankfully, our General Manager, Jeff Clegg, found it rolled up in the Lodge attic and recognized its historical importance. With the help of a valued guest and some talented artists, we successfully restored and framed the painting. Be sure to stop in to check it out on your next visit.

A group from Idaho State University discovered the Sawtooth Fault running 40 miles long in 2010. The scientists estimated that the fault produced earthquakes approximately 7,000 and 4,000 years ago and can produce a modern earthquake measuring around 7.5 magnitude on the Richter scale, meaning residents of Boise could feel it.

The Borah Earthquake rocked Idaho in 1983, registering a magnitude of 6.9 on the Richter scale. This caused many rockslides and avalanches throughout the Sawtooths. The most noticeable of these slides is visible on Grand Mogul, where a large portion of rock and Earth collapsed and tumbled into the southern end of Redfish Lake.

8. Hundreds of Miles of Trails

The area surrounding Redfish Lake is a hiker’s paradise, with some of the best scenery and solitude you’ll find in the United States. An amazing 23 Trailheads lead to 40 trails, which cover over 350 miles of the Sawtooth Wilderness Area. Lace up those boots and get ready to hit the trails.

Three major rivers make their beginnings in the Sawtooth National Recreation area. They are:

The Sawtooth Mountains were so-named due to their steep, jagged peaks. Some of the most famous and visible include:

The Elephant’s Perch is arguably one of Idaho’s most famous climbing venues, and perhaps its best big wall climbing opportunity. The massive wall stands over 1,200 feet tall. You can catch a glimpse of Idaho’s “Shangri-La” from the Saddleback Lakes as climbers take on this granite behemoth during the summer months. 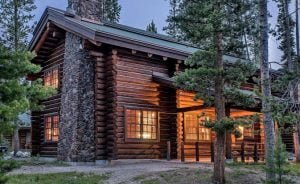 Make the most of your trip to the Sawtooth Mountains at the Redfish Lake Lodge. Our collection of unique accommodations combined with an assortment of resort-style amenities, on-site dining, and activities makes for the ultimate vacation experience. Whether you want to hike through the mountains, rent a boat on the lake, or relax on the beach, there’s no better place to escape the hustle and bustle of everyday life.

Start planning your trip by booking one of our accommodations. You can also check out one of our three sister properties in Stanley if we don’t have availability. We look forward to welcoming you to the Redfish family.

What is the Sawtooth Salmon Festival and Why Should You Check It Out?