The Stanley Area Offers Some Of Idaho’s Rarest, Most Spectacular Wildlife

Redfish Lake Lodge sits in one of the most beautiful, natural settings you can find on Earth. And with that spectacular setting comes natural beauty brought by the presence of unique and wonderful animal life. The Sawtooth National Wilderness Area proudly protects countless creatures that reside within its boundaries and we’re lucky enough to see them on a fairly regular basis. As guests arrive, we’re often asked: “What animals will I see?” or “What kinds of critters live here?” So we decided to take a few minutes to make a list of some of our favorite (or our guests favorite) animal visitors. Be sure to keep your eyes peeled on your next visit. 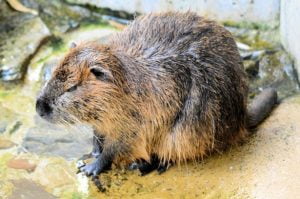 Felt Top Hats were the fad and the driving force behind the fur trade that first brought people to this beautiful part of Idaho in the early 1800’s. The fur from the back of the American Beaver made the best felt of its time and pelts were in high-demand. Lucky for the beavers that fad faded shortly after the area’s discovery, so many beavers were able continue building dens all about the marshy areas of the Sawtooth Valley. Near Redfish Lake, you can hike along the beautiful Fishhook Creek Trail to an open meadow that locals call “The Beaver Ponds.” At this location, especially in the quiet safety of evenings and early mornings, they can be spotted serenely swimming about the still waters.

Who knew a weasel could be so cute? With their round ears, short limbs, slender bodies and bushy tails, Pine Martens can usually be spotted around the Redfish area in the earliest parts of the season. These furry creatures closely resemble the ferrets you may see at a pet store, but there fur is dark brown and they are no fun to play with. Ask many of our employees and they can tell you that although scarce in the mid-summer – as crowds grow and they move to the woods – they are some of the most prevalent wildlife around in May. They are very resourceful and often find their way into structures and buildings to keep warm for the harsh Sawtooth winters, so you’re bound to see one running about foraging the last bit of food he can find before pesky humans invade their space for summer. 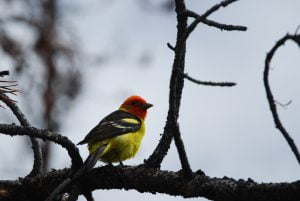 If you haven’t seen a Western Yellow Tanager before, you may think that someone’s pet bird has flown the nest for a beautiful mountain paradise. These striking yellow and black birds with bright, red head often travel in pairs, with the male representing the more colorful appearance and the female a more subtle yellow-green tone (and no red head). If you would like to catch a glimpse of this stunning bird, your best chance comes early in the summer season as they move through our region on a migratory path to other mountain locales. Their typical stay extends into early July, as they nest in our area’s tall coniferous trees and feast on local insects.

Elk, or Wapiti, as native tribes referred to them, are a native and long-standing resident of the Sawtooth Valley. We are very fortunate to be able to observe these gigantic and historic mammals roaming all along the mountain range. Because Elk tend to follow the snow line, the best time to see them at lower elevations is throughout the winter and early spring, before they seek their summer homes at higher ground. Elk cows are most often seen and they typically travel in large herd groups. During the mating season, these groups – called harems – associate themselves with a dominant male (bull). Watch for the harem of females and if you are lucky you may see a calf or an elusive bull. 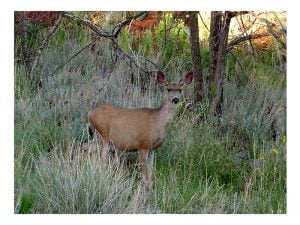 Mule Deer are an extremely common, often friendly, visitor to the Redfish Lake Lodge area. The true question is, can you come to Redfish and not see a mule deer? The answer is: not likely. These beautiful creatures are named for their large, Mule-like ears, which offer them exceptional hearing capabilities in the quiet forest. Late spring is usually a great time to see Does grazing about with their fawns trying to pack on pounds following the harsh Sawtooth winter. Mule Deer are also very active at dusk and during the night, which can make them dangerous on roadways, so be aware when driving after dark. 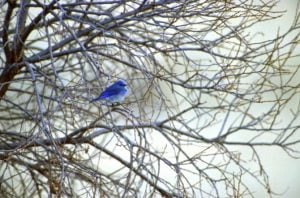 The Mountain Bluebird is an amazing sight to behold. This small, bright blue bird is almost fluorescent as it glows against the greens and browns of the mountain forest. It’s also Idaho’s state bird, a position it earned due to its beauty, as well as its love of the open lodge pole pine forests and alpine hillsides that make our state special. Redfish Lake Lodge is nestled at the heart of that scenic territory, which makes the Mountain Bluebird a perfect area resident. Often seen traveling in pairs (the male glowing brighter, the female more gray), these magnificent birds thrive near the lake during summer months, and can be seen dipping and diving in the brush along the Redfish Lake and Fishhook Creek trails, as well as many others in the area. 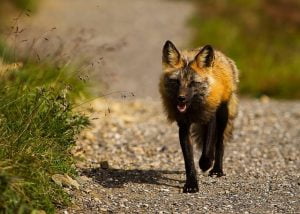 By the time the summer months arrive, the beautiful Red Fox has shed most of its thick and lustrous red winter coat, and what is left appears as an array of mostly grayish short fur; However, one ever-distinguishable feature is the fox’s tail, accompanied by its sly and curious nature. Whether you’re camping along one of many backcountry trails or driving along the Redfish road, keep your eye out for these sneaky canines, especially during the hunting hours of dawn and dusk. While the area’s Red Foxes may be sneaky, they’re not necessarily shy – so one might make an appearance if you’re lucky. 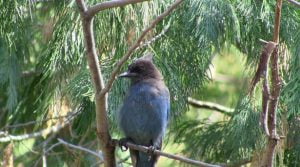 What is that constant squawking? And who took my sandwich?! Meet the Steller’s Jay. If you have been to Redfish Lake Lodge, you may have met one of these vocal, dark blue birds before. If so, it was likely sitting above you in a tree, peering over your lunch and loudly informing you that it expected a bite. While some visitors consider them somewhat of a nuisance, it’s difficult to overlook their striking appearance and confident, handsome nature. Don’t fall for that distinctive mohawk and deep, iridescent blue-black coloring too quickly. They won’t hesitate to steal your lunch. 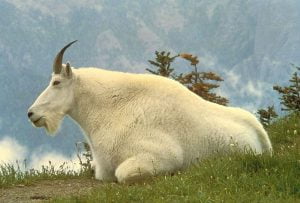 Mountain Goats are one of the iconic and symbolic features that the Sawtooth Wilderness has become known for. You have to head a little further into the backcountry to enjoy a view of this rare and majestic mountain beauty. It is one of only a few large mammals that calls the ruggedness of the Sawtooth mountain peaks its home. If you are willing to crawl over a little talus and scree yourself, you may be fortunate enough to see a Goat in its favorite territory – using it’s unique, toe-like hooves to cling to the steep rock faces. Otherwise, simply sit at a high mountain lake that is surrounded by peaks and listen for falling rock, likely evidence of a Mountain Goat high above. Grab some binoculars and see if you can spot the white dot moving amongst the towering grey granite.

Just one of the many birds of prey that can be spotted around the lake, the Osprey makes its nest high in the trees above moving water bodies and uses the Lake for fishing/hunting. You can often see these beautiful raptors soaring high above the water in search of food. Easily distinguishable by their white underbelly, often brown-gray speckled near the wings, and noticeable by their screeching calls, these amazing flyers often put on aerobatic performances for guests as they hunt over the Lake – and they often end in success, the proud hunter returning with a fish or snake in its talons. 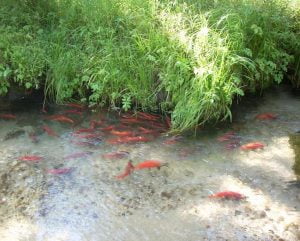 Redfish Lake received its name as a result of the (Sockeye) Salmon, whose bright red color changed the hue of the entire lake. While Salmon still return, the population has dwindled over time and this sight has become more rare. However, one small, “landlocked” species of Salmon – called the Kokanee – remains in the Lake all year long. These small fish are typically silver in color, but during the spawning months of August and September, they morph into a bright red color and begin fighting the current out of the Lake and up Fishhook Creek (near the Redfish Visitor Center) to spawn. Take a relaxing stroll on the boardwalk to get a great look at these beautiful fish, and many other species of wildlife, as well as reading some interesting natural and historical information provided on signs throughout the route.

While we don’t have to worry about their big, scary cousin – the Grizzly Bear – our region is definitely home to many Black Bears. These large mammals are quite shy and typically far more scared of humans than humans are of them, which makes encounters fairly rare. However, they can be very active dependent upon the particular year, season, or weather, so it’s important to be aware of them while traveling in the area. Black Bears are omnivorous, so they’ll eat virtually anything – including cans of beer, hot dogs, coolers, bacon grease, chocolate, and virtually anything else that smells or seems delicious – so it’s crucial to close and lock all car doors and windows, and not store food outside of cabins and tents. To avoid surprises, we suggest making plenty of noise while hiking on trails and playing in the backcountry.

As you can see, there are a wide variety of animals residing in the Redfish Lake area, and this is definitely not a complete list. Some of the awesome animals that are seen but weren’t listed are, Antelope and Moose, Badgers, Wolverines, Porcupines, and many other small mammals, along with countless amazing birds, such as Eagles, Hawks, Owls, Cranes, Herons, and many, many more. Each day brings a new opportunity to view one of these – and even more – rare and beautiful creatures against our spectacular mountain scenery. We highly recommend that you bring a great set of binoculars and your favorite camera on your next visit. You’ll likely encounter something fantastic and it’s always a joy to share the view.

Your Complete Guide to the Weather at Redfish Lake

5 Reasons to Spend 4th of July at Redfish Lake